Taking Sides in Peacekeeping: Impartiality and the Future of the United Nations – a book by Emily Paddon Rhoads

United Nations peacekeeping has undergone radical transformation in the new millennium. Where it once was limited in scope and based firmly on consent of all parties, contemporary operations are now charged with penalizing spoilers of peace and protecting civilians from peril. Despite its more aggressive posture, practitioners and academics continue to affirm the vital importance of impartiality whilst stating that it no longer means what it once did. Taking Sides in Peacekeeping explores this transformation and its implications, in what is the first conceptual and empirical study of impartiality in UN peacekeeping. 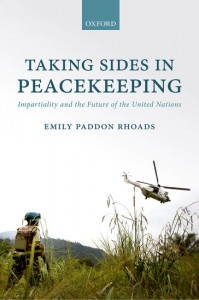 The book challenges dominant scholarly approaches that conceive of norms as linear and static, conceptualizing impartiality as a ‘composite’ norm, one that is not free-standing but an aggregate of other principles-each of which can change and is open to contestation. Drawing on a large body of primary evidence, it uses the composite norm to trace the evolution of impartiality, and to illuminate the macro-level politics surrounding its institutionalization at the UN, as well as the micro-level politics surrounding its implementation in the Democratic Republic of the Congo, site of the largest and costliest peacekeeping mission in UN history.

Taking Sides in Peacekeeping reveals that, despite a veneer of consensus, impartiality is in fact highly contested. As the collection of principles it refers to has expanded to include human rights and civilian protection, deep disagreements have arisen over what keeping peace impartially actually means. Beyond the semantics, the book shows how this contestation, together with the varying expectations and incentives created by the norm, has resulted in perverse and unintended consequences that have politicized peacekeeping and, in some cases, effectively converted UN forces into one warring party among many. Taking Sides in Peacekeeping assesses the implications of this radical transformation for the future of peacekeeping and for the UN’s role as guarantor of international peace and security.