In many, if not most, armed conflicts, far more deaths occur as a result of the humanitarian crisis created by the conflict rather than from hostilities. However, in many recent conflicts humanitarian actors have faced serious challenges in delivering much-needed relief supplies and services to civilians in need. The United Nations Secretary-General, in his recent reports to the Security Council on the Protection of Civilians, has identified improving access for humanitarian operation as one of the five “core challenges” to enhancing the protection of civilians in armed conflict. In his November 2013 report to the Security Council, the Secretary-General called for further analysis of the issue of arbitrary withholding of consent to humanitarian operations and the consequences thereof. He in
structed the UN Office for the Coordination of Humanitarian Affairs (OCHA) to engage with a range of actors to examine the relevant rules and options for guidance in this area.

OCHA commissioned the Oxford Institute for Ethics, Law and Armed Conflict and the Oxford Martin Programme on Human Rights for Future Generations, both of which are co-directed by IoW Co-Investigator Dapo Akande, to carry out this exercise. Dapo Akande and Emanuela-Chiara Gillard, Senior Research Fellow at ELAC and Research Fellow at the IoW Project, engaged in a series of expert consultations which took place in Oxford, in addition to informal discussions in Geneva and NewYork with representatives from a number of international agencies and NGOs, with the aim of providing a restatement of the international law rules. 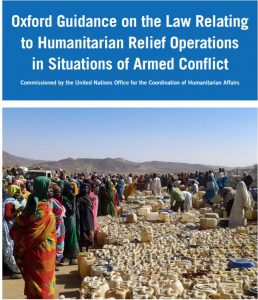 This process has resulted in the Oxford Guidance on the Law Relating to Humanitarian Relief Operations in Situation of Armed Conflict. The Guidance aims to assist a variety of actors concerned with humanitarian relief operations, including parties to armed conflict, other states, international and non-governmental organizations seeking to provide humanitarian assistance, the United Nations Security Council and General Assembly and other relevant bodies, legal practitioners, scholars and the media. Its objective is to enhance understanding of the legal framework and inform policies to improve humanitarian access.