As the Individualization of War project draws to a close, we have been working with artist Rae Scarfo to visually convey the findings of three research projects conducted by IOW collaborators. This post shares the final images along with a brief overview of each research theme.

1. The Masculine Virtue of Sacrifice in War – Dr Graham Parsons 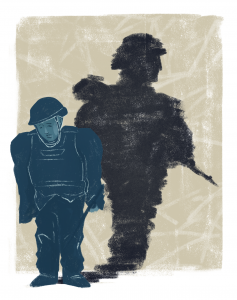 Graham’s work interrogates the link between masculinity and warrior identities. His research explores the way in which male engagement in violence can be understood within the context of an honourable masculinity – one that gives meaning to social expectations of self-sacrifice of men during conflict. For recent writing by Graham see here.

In the image shown here, a young boy is weighted down in heavy military gear as his shadow – an adult warrior – looms large behind him. 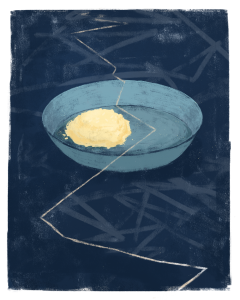 Manu’s work, carried out in collaboration with Dapo Akande, examines questions of conflict-related food insecurity. They consider the rules regulating humanitarian relief operations in armed conflict, the prohibition of starvation of civilians as a method of warfare and the interplay between humanitarian action and sanctions and counter-terrorism measures. Listen to Manu and Dapo’s Podcast on starvation in armed conflict here.

This image highlights the challenges of delivering food aid in the midst of armed conflict, offering an abstract take on issues of starvation, food aid, borders and international law. 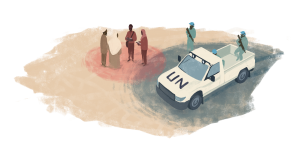 Rebecca’s work investigates the way in which humanitarian actors interact with armed actors who share the operational space in conflict zones, focusing on multi-national interventions and UN peacekeeping. For an examination of these dynamics in South Sudan by Rebecca see here.

Rae Scarfó is a multidisciplinary illustrator and designer with a focus on visual storytelling. They’ve created behind the scenes concepts for make believe worlds in film and television, helped UX researchers illustrate real world scenarios for VR, and storyboarded all types of narrative content. Their style is especially fluid, adapting techniques and tools to fit the mood and atmosphere of any particular project. Past clients include Google, NBC, Universal Pictures, Twentieth Century Fox, CBS, SYFY, and Disney. Examples of work can be viewed at raescarfo.com or fivecirclesdesign.com.